Monogramming gets a bad rap. Lots of people see it as some form of self-centeredness, putting your family initials on things around your home, on your shirts, or on your purses.

In truth, putting a monogram in your home is a celebration of the people who have gone before you who have had that name.

Monograms are ancient. They had the advantage of being a signature, as well as being able to be recognized by a population that, by and large, couldn’t read. Even if the monogram is in another language, it’s easy to recognize after seeing it a few times.

A brief history of monogramming

The first monograms were used for royalty to mark their property and money.

As the world’s economy transitioned from a barter system to a monetary system, the official who ruled over an area would monogram the coins of the realm to show where those coins came from. Items belonging to a king or queen would be marked so that everyone would know and would leave the items alone. This included knights and armies, horses and swords, castles and clothes.

Today, one of the most famous brands on earth, uses a monogram of a single letter a logo:

Most people around the world wouldn’t need to be told that that’s the symbol for Coca-Cola.

Artists also used monograms to sign their names to their pieces. Using just three letters made it easier to ignore the signature. Rembrandt Harmenszoon van Rijn is much more conspicuous than RHL.

Once textiles were being mass-manufactured and everyone had the same clothes, monograms became a way to stand out from the crowd. If your monogram for John Q Public are JPQ, you knew whose clothes you were to wear when changing coming out of the mines or simply grabbing clothes in a house were a dozen other people lived.

Monograms were also an acceptable way to sign legal documents. Many people never learned to write their full name, but could memorize three initials and use that to sign contracts.

In the United States, interest in genealogy exploded after Alex Haley’s Roots traced his family from Africa to his desk. That dramatic story was one of the greatest events in television history and it changed how the world saw their own family history.

The next great change was the internet. Now, documents that sat mouldering in a parish in Hungary or a government census document that was formerly only available by traveling to Washington, DC, could be accessed instantly. By indexing all of these documents, finding ancestors and acquiring new information is easy and fast.

Genealogy is the second most popular hobby after gardening in the US. It represents one of the internet’s biggest traffic sources. This popular has given rise to pride in the family name. If your family arrived from Italy through Ellis Island or onto Plymouth Rock or where Native Americans who have been here for thousands of years, you can show your pride by tracing your family’s history back for hundreds of years.

Using the power of the internet, people are able to discover their history dating all the way back to Europe, Asia, and Africa. Every day, new written records are added from government documents, church records, and more.

Monogramming shows your pride in your ancestors and all that they lived through. For most of us, our ancestors were “average” people in their time, but in ours, they were heroes. You might have a family member who explored the wilds of Canada in the 1700’s or who set up a home in the Great Plains when there was no one else around.

For African- Americans, knowing one’s history might not be as pleasant but it can be rewarding to trace a family member’s’ movement from Africa to the US or the Caribbean. While this part of your family’s history might be difficult, it is part of what makes you you and should be celebrated.

What items can be monogrammed?

At Have Faith Boutique, we have everything from shower curtains to coasters that can be monogrammed. Show your pride with a monogrammed baking pan or a baby blanket.

Monogrammed items also make wonderful gifts.You can help someone celebrate their family’s history by simply finding a great gift that has the family initials on it.

Previous: The Customized Child(ren) – Giving the Them Their Own Items
Next: Welcome to the new HaveFaithBoutique 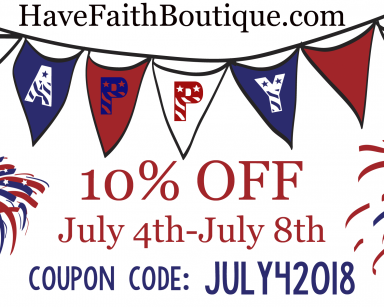